The benevolence of its people, its rich cultural traditions and its wonderfully diverse natural features make Valencia a wonderful and much desired tourist destination in Spain. As the country's third largest city (behind Madrid and Barcelona), Valencia's 720,000 plus population keeps this vibrant city bubbling day and night and sees it celebrated as a major forward-thinking and progressive multi-cultural society within Europe.

Valencia has excellent transport links to the rest of Spain and many major European cities making it much more accessible than ever before. Travel time is only two hours by superfast train from Madrid and three hours by train from Barcelona and a flight from London for example, takes only two hours. Road connections are readily available with the city connected to the rest of Spain by modern motorways.

There are a number of locations/attractions in Valencia which a tourist visiting for the first time shouldn't miss and we've outlined them for you, our readers, below:

The subtropical Mediterranean climate of Valencia has endeared towards producing the types of products found for daily sale in the central market. Covering over 8,100 square metres and encompassing over 850 shops, stalls and stands the central market is at the heart of the old town offering a diverse and impressive array of amazing (mostly locally sourced) products. Known for selling large amounts of Saffron ("Red Gold") that one uses to produce the flavours and colour of the local Valencian Paella this is one of the biggest indoor markets in Europe. 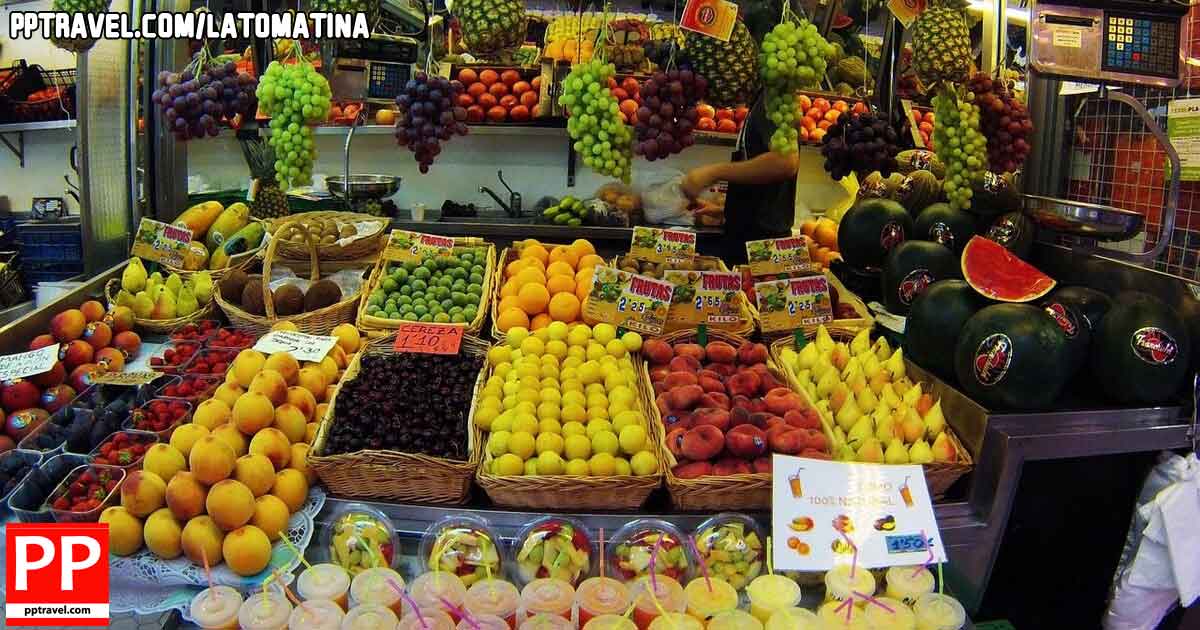 Located in a grand architectural pearl with huge windows, grand stained glass domes, vaulted beams and exquisite hand-painted tiles this is an impressive building and worthy of its protected standing as a "Spanish Property of Cultural Interest" as so decreed by the Spanish Government.

Traders distinguish their shops with various differing designs to attract tourist and locals alike, and it almost becomes a competition in "who can out do who" in gaining a customer's favour but all held in a spirit of comradery and good humour.

One for the food lovers for sure.

Located directly to the south of the city this is a nature lovers paradise. Known locally as the "Mirror of the Sky", because of how the reflection of the blue skies rests on the water, this huge freshwater lagoon is very popular for fisherman, hikers, swimmers, cyclists, kayakers, birdwatchers. The boat rides (especially) early evening can be spectacular with amazing panoramic views of the sunset over the water. 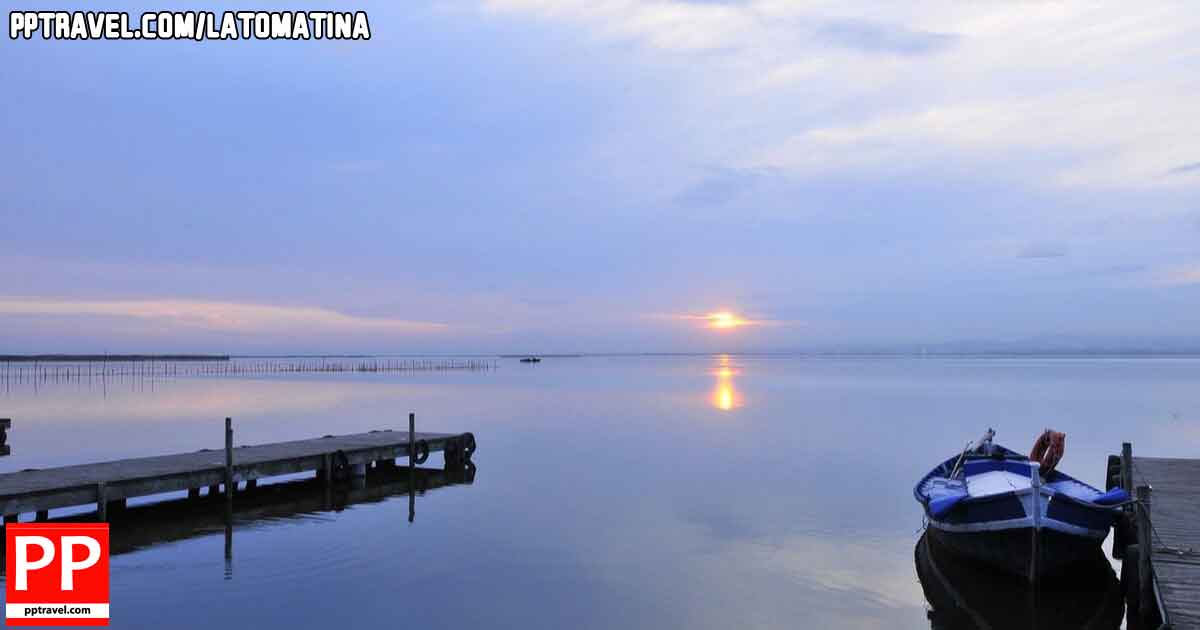 Mark has worked at PP Travel for over 25 years and has travelled extensively in Spain having spent more than three moths in Valencia alone.

There are many restaurants and bars that border the Albufera on the southern Mediterranean side, the perfect place to unwind after a day's activities on and around the lagoon. Grab an awesome locally cooked Paella (arguably the best in Spain) or perhaps try the regionally inspired Horchata drink of rice milk, sugar and cinnamon - very refreshing over ice and made from locally grown rice.

If you are a nature lover then you won't want to miss a visit to the Albufera.

The City of Arts and Sciences

The city of arts and sciences in Valencia is the modern face of the city. Finishing touches were finally put to it 2005 and it has become the central point of the city for cultural exchange with an Opera House, IMAX Cinema, Science Museum, the Umbracle (outdoor nightclub and function centre) and Europe's largest aquarium called the "Oceanographic"

These futuristic space age looking buildings have become an integral part of the city's skyline and appear on almost all marketing material produced promoting the city. Lying within the regenerated dry riverbed of the River Turia, the city of arts and sciences is centrally located between the old town and the beach and is a favourite with locals and tourists alike.

Artists, theatre lovers, museum enthusiasts and photographers will love this newest part of the city!

The old fortified walls of Valencia were built in the 14th century and destroyed in the 19th century and only the Serrano Towers stand firm to this day as part of those walls. Actually one of the twelve gates that used to form part of the walls, the towers have had many uses over the years from fortification to feasts, and prisons to parties. The Gothic look of the towers is unmistakeable as they tower over what was once the Royal Road to Barcelona

Now open to the public there are magnificent panoramic views to be had from the top of the towers and they are utilised now for official ceremonies of the city most notably the Crida which is the opening ceremony of Valencia's most famous fiesta, Fallas.

The Basilica of the Assumption of Our Lady of Valencia otherwise known as Valencia Cathedral was constructed in the 11th century and consecrated in 1238. Containing many 15th century paintings and what is supposed as the "true" Holy Grail this Valencian Gothic building is a must see for architectural enthusiasts and those with a keen religious interest. 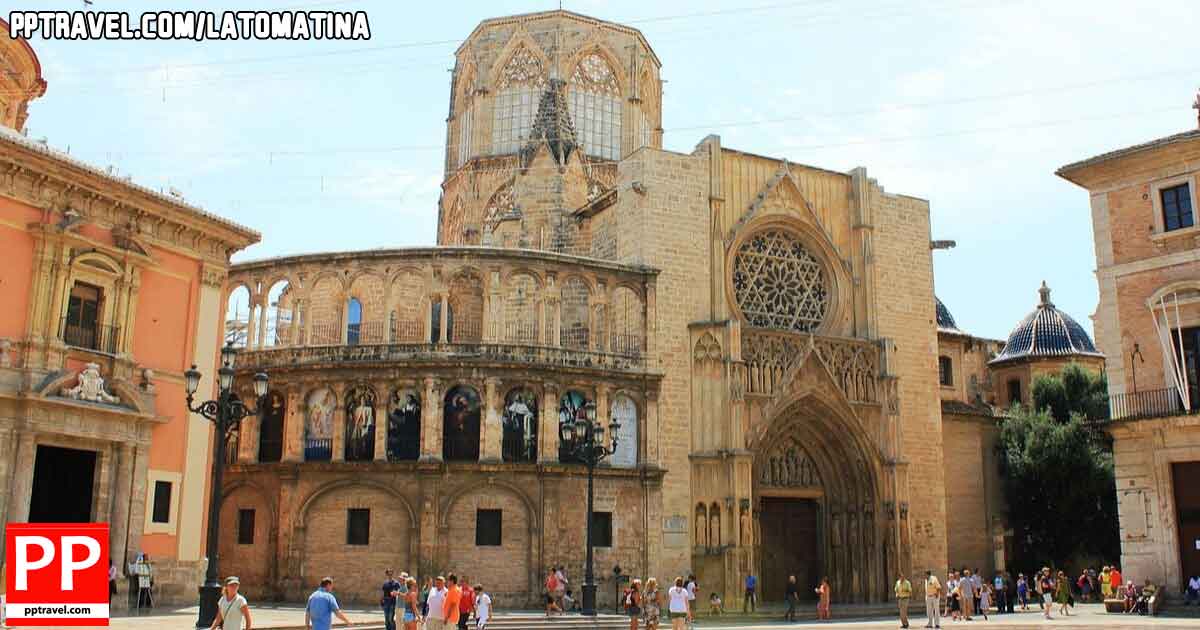 Located at the northern end of Plaza de La Reina the cathedrals dome, bell-tower and magnificent iron gates are the features that first draw the eye. Damaged during the Spanish Civil War the church has since been declared a "Cultural Landmark" by the city council and many tens of thousands of visitors flock to experience the feel of its history each year.

Declared by UNESCO as part of HUMANITYS HERITAGE - this hugely expansive and beautiful Gothic designed building was a place of direct mercantile exchange during the city's 14th and 15th century prosperous trade era. Comprising of three distinct buildings and gardens over 2000 square meters, the La Lonja gives the appearance of a Medieval Castle and is the main attraction of the old town of Valencia.

28 Gothic gargoyles align the top of the building's exterior in fierce enigmatic symbolism of the city's strength and power during its golden ages and those wanting to view the evolution of trade in past centuries while immersing themselves in the gigantic art of an impressive building containing restored plush furnishings should look no further than the La Lonja.

This is history at your fingertips.

Enjoy Valencia today and enjoy its wonderful people and Mediterranean ambiance. Tourist season is April to September and many tourist flock to Valencia when the nearby fiesta of La Tomatina - The Tomato Fight occurs in the nearby town of Bunol in late August.

Posted: 03 October 2019 08:52:28 GMT by Mark
La Tomatina is the World's largest food fight. It's totally crazy. It's totally wild. It's out of control and an unbelievably fun experience. On the last Wednesday of August each year, the world-famous tomato throwing festival takes pl ... read more

Best Cities to Visit in Spain
Checkout our list of the five most fun cities to visit in Spain where there is loads more to enjoy than just sun, sea and sangria!..more

La Tomatina - Food Fun or Food Wastage?
As the world becomes more concerned about over consumerism, resource and food wastage and corporate social responsibility we address the topic of the La Tomatina Tomato fight in Sp..more 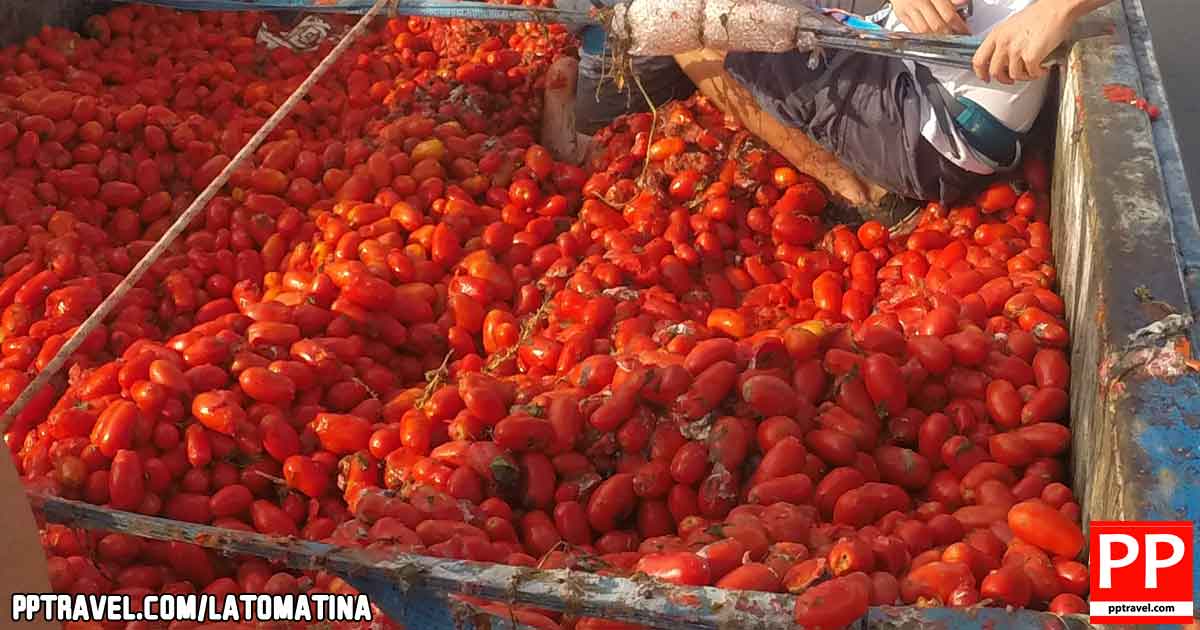 La Tomatina - My Day With The Tomatoes
Being in the thick of the action is just part of the job. PP Travel's Colin "Bomber" Dale discovered all of this and more, venturing to Spain this week for the "sport" of tomato th..more 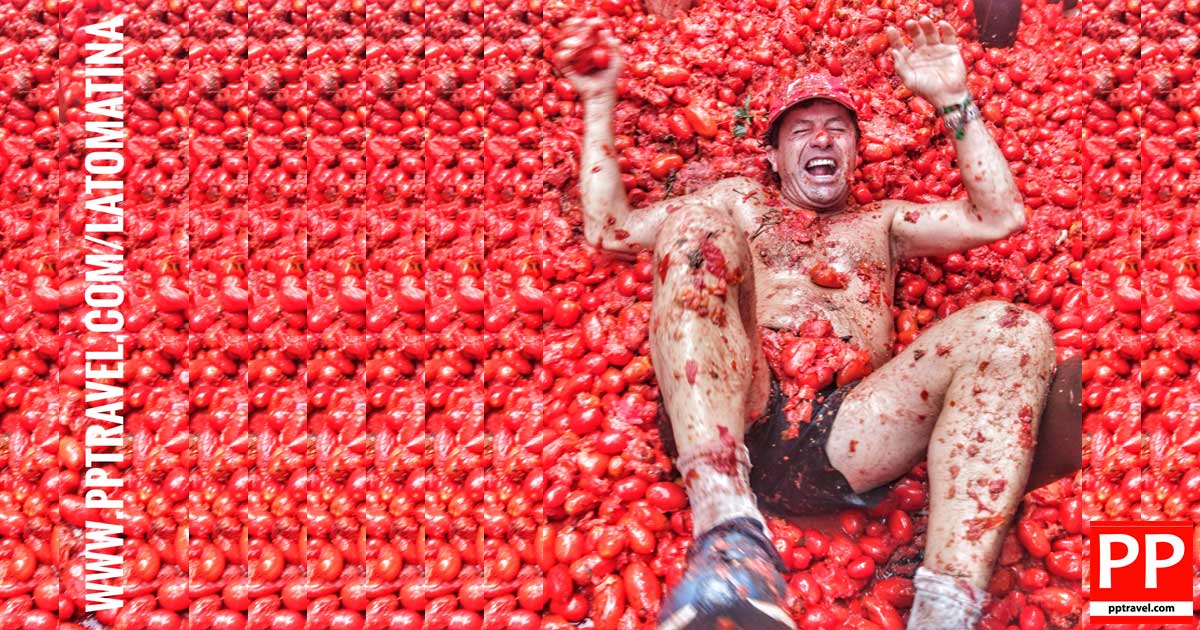 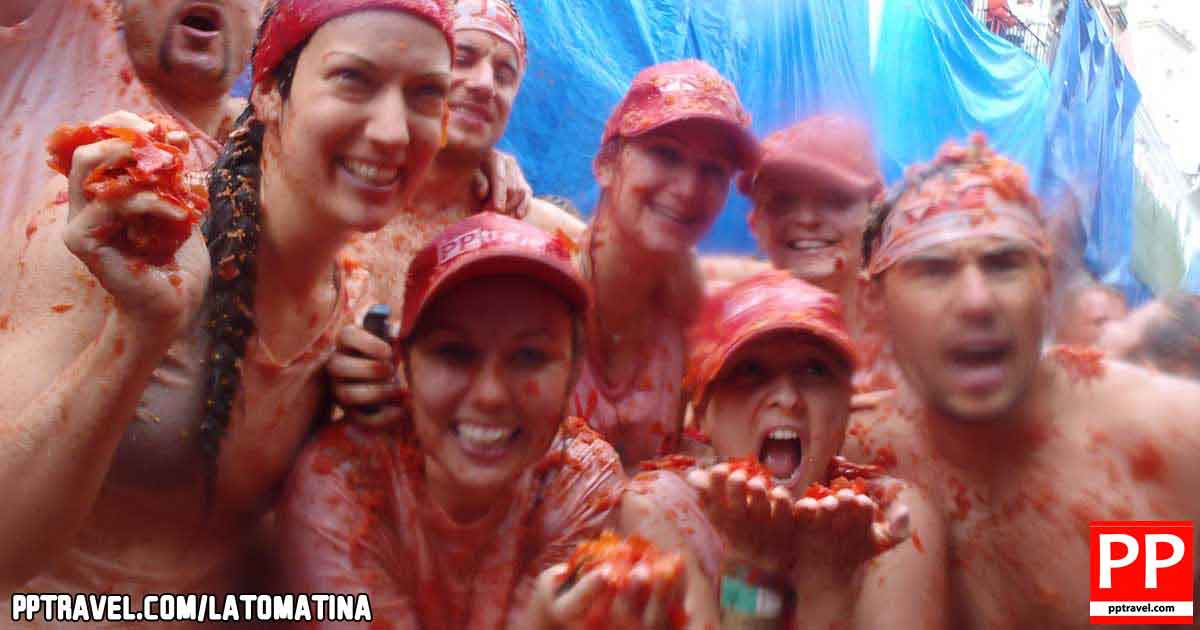