Munich Oktoberfest - The Veteran and the First Timer

Having survived a tomato-chucking challenge in a Spanish village, PP Travel's very own Colin "Bomber" Dale lines up for his 32nd Munich Oktoberfest.

When Mayor Dieter Reiter tapped the first barrel in Munich and passed a stein to the President of the State of Bavaria last weekend he was kicking off something that is seriously BIG. Not only was the size of the beer in his hand extremely large, he was beginning an event that is so enormous in scale that it really must be seen to be believed. Europe's biggest festival - and it's all about beer, or bier as the Germans spell and drink it.

The first day of Munich's world famous beerfest is not your normal run of the mill home-and-away game, this is the grand final of lager lowering. And like the biggest day of our native game, it's played on a grand stage. The Oktoberfest, set just outside the city centre, covers an area of over 42 hectares - seven hectares bigger than the MCG's Yarra Park - and it's only ever used for this 18-day event. 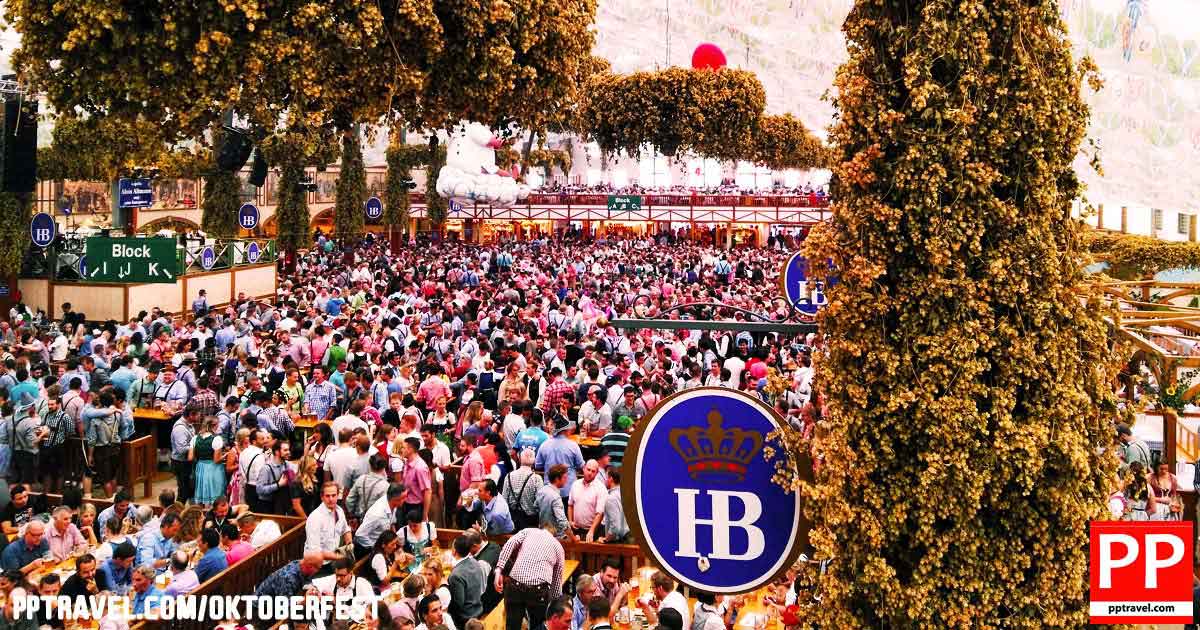 Nothing properly prepares the first-time visitor for the scale of the Oktoberfest. You stroll past the massive Bavaria statue, the towering Steiger ferris wheel, once the world's largest transportable wheel, and enter into an expansive fairground that really is Germany's "adult Disneyland". For me, the air of excitement and anticipation hasn't worn off, even after more than three decades of running tours to this beautiful city. Being in the middle of the vast, fun-filled playground again on opening day somehow brings on a feeling similar to the excitement that engulfs you as your team runs out on to the G for that one day in September.

We take our normal Day One seats in the biergarten of the Lowenbrau tent and wait for the game to begin. However, the wait for the Mayor of Munich to do his traditional barrel tapping at noon, seems to take forever. Then there's a further 10-minute delay until a friendly fraulein arrives with the first haul of Munich's finest brew. Finally, ice-cold litres are in our hands. Prost! The ball has been bounced and the big match is on!

Getting through the full four quarters of a day at the Oktoberfest certainly takes some experience, guile and stamina. This is a marathon and is no place for sprinters who will inevitably fall as the steins go down. I sit next to an eager, thirsty young Melbourne lad, Max Harris, raring to take on his first beerfest. He asks how many beers does it take to "get fired up"? Time now to regale him with the old "VB can challenge" story.

"You've got to remember that there are nearly three cans of VB in each stein," I warn the 21-year-old traveller. "So, a couple of quick steins and you've knocked off six tinnies. Then, by the end of your third, you're almost into double figures of cans drunk. And you have got to remember the Bavarians have a special kicker that makes running out the game extremely difficult. All Oktoberfest beer is brewed at least 20 per cent stronger than normal full-strength German lager. Pace yourself young fella and I recommend plenty of time on the interchange bench as well." 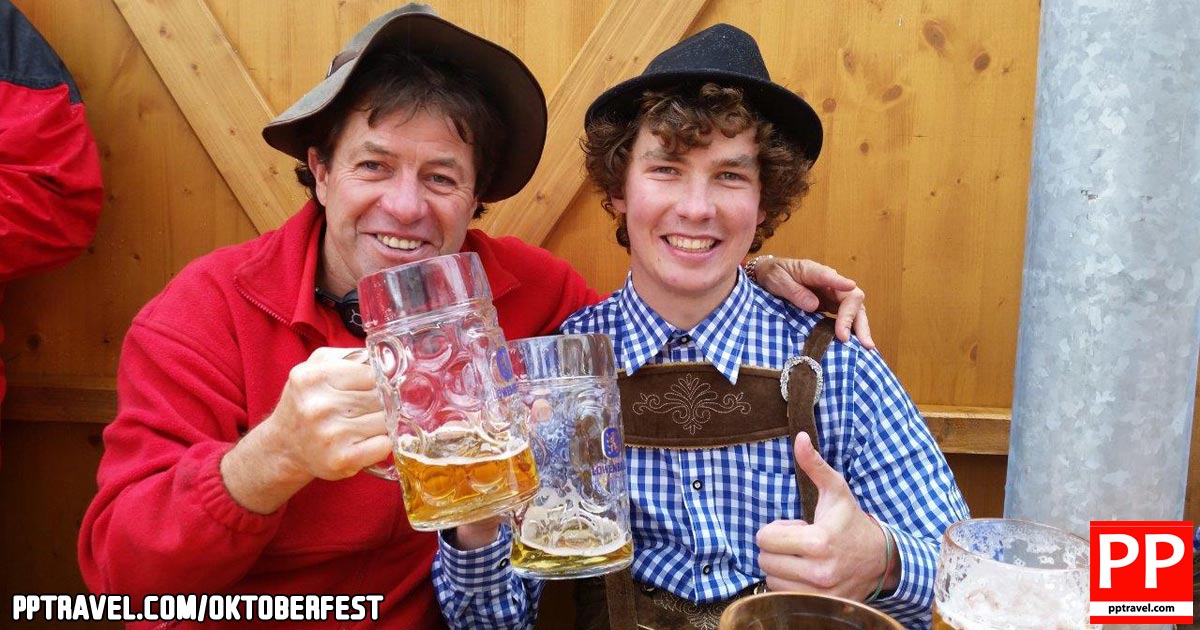 The great thing about the Oktoberfest is that there is plenty to do while taking a break from downing the frothing beverage. While the 14 brewery "tents" - they're actually huge halls with a canvas roof that take two months to build and one month to dismantle - make up just over half of what the locals call the "Weisn", the other half is a huge fairground in a slap-happy world of sausages, fancy hats and maidens with flowers in their hair. Rollercoasters, ghost trains, side-shows abound. Nearly all the men sport lederhosen - leather shorts once worn by peasants working the fields - now almost compulsory gear for locals and tourists alike. Women wear their dirndls with fabulous looking low-cut blouses. Between beverages, people stroll the happy central promenade, giant gingerbread cookies in hand, enjoying the loud-and-proud celebration of all things Bavarian. For visitors, there's no better place to see and join Germans at play.

An amazing six million visitors descend upon the Bavarian capital for the fest - Munich itself has a population of 1.4 million. And the staggering statistics mount up year after year. The Oktoberfest started as a free public celebration of a Royal engagement, in the fields outside the old city walls in 1810. The locals enjoyed it so much, they returned the following year and so on. The rest is history. Now over seven million litres of beer are consumed during the 16 to 18-day fest, that normally finishes on the first Sunday in October. Around half a million chickens are consumed as well as 120,000 pork sausages. This event is seriously massive.

The crew and I head into Paulaner's Winzerer Fahndl beer tent where we are fortunate enough to have a 5pm table reservation. Like most of these monstrous, vast marquees, it's filled with row after row of wooden tables and benches. There are 8,500 people seated inside and 2,500 in the surrounding biergarten. Patrons are in full swing. The fun and friendly party atmosphere is infectious. On stage, an ensemble of brass, woodwinds, accordion, and drums have stopped playing their traditional oompah music. It's now more of a rock concert with great old singalongs which the locals and tourists alike belt out while the food and steins continue to flow with fine German efficiency.

We're now into the last quarter, so it's time to head back inside to our favourite tent, the Lowenbrau, where long-time fraulein friends Suzanne and Marion sneak us in past the queue. Having been to the fest so many times does have its advantages. It's now a full-on party frenzy, of prosting and dancing on the tables. Here we bump into young Max again, having the time of his life. "This is so enormous. I can't believe the whole event's carnival vibe," he declares. "It's a real German family affair and everybody is so happy. They all seem so friendly which is such an amazing thing in an age where so many people seem detached."

The band belts out Robbie Williams Angels which means it's now 10.30pm and the final siren is about to sound. It's been a long, gruelling day at the office as the VB/stein count mounted up. But you couldn't call it work! Round one has truly been a winner - but here at the Oktoberfest it's a long season for my PP Travel team. One down, 17 days to go. It's a tough job, but someone has to do it!

Posted: 27 September 2017 06:35:30 GMT by Bomber
After the cancellation of Oktoberfest in 2020 and 2021 we are all seriously counting down the days until September 2022 when we can get back into our Dirndls and Lederhosen to again enjoy that infectious and amazing atmosphere that is uniquely the ... read more