Gallipoli - The French and the ANZACS - A Shared Memory

10,000 - That's the number of war dead suffered by France at Gallipoli, more than Australia, way more than New Zealand yet whilst the ANZAC legend was born out of the campaign the French involvement has been sadly all but neglected from their entire national memory and certainly one could be forgiven in thinking France played no part in the ill-fated campaign.

Seemingly relegated to history as a mere footnote in the conflict, the 42,000 French troops that were eventually deployed at Gallipoli had an account of almost 27,000 casualties - a high amount in anyone's reckoning! That they did their part in the war effort at Gallipoli is undeniable but for some reason that effort is remembered in obvious contrast to Australia and New Zealand's accounts of their countries achievements in the battle which are remembered by both nations as pivotal in their histories.

In the initial assault on the Dardanelles the French were deployed as what was to be a diversionary tactic, the aim being to draw the Ottoman and German artillery attention away from the bulk of the landings due to take place on the Gallipoli Peninsula just across the straights. The newly formed Corps Expeditionnaire d'Orient made up of North African (Algeria and Tunisia), Metropolitan French, Foreign Legion and Senegalese Troops were the first to deploy on April 25th 1915 when they landed at Kum Kale on the Asiatic side of the Dardanelles with over 16,000 men. Under heavy fire the French division, despite obvious lack of training, managed to make it ashore and secure the village of Kum Kale and the nearby Ottoman Fort thus neutralising the Turkish presence on the eastern side of the Dardanelles and they were, in fact, the only troops of the entire operation that managed to achieve their Day 1 objective. 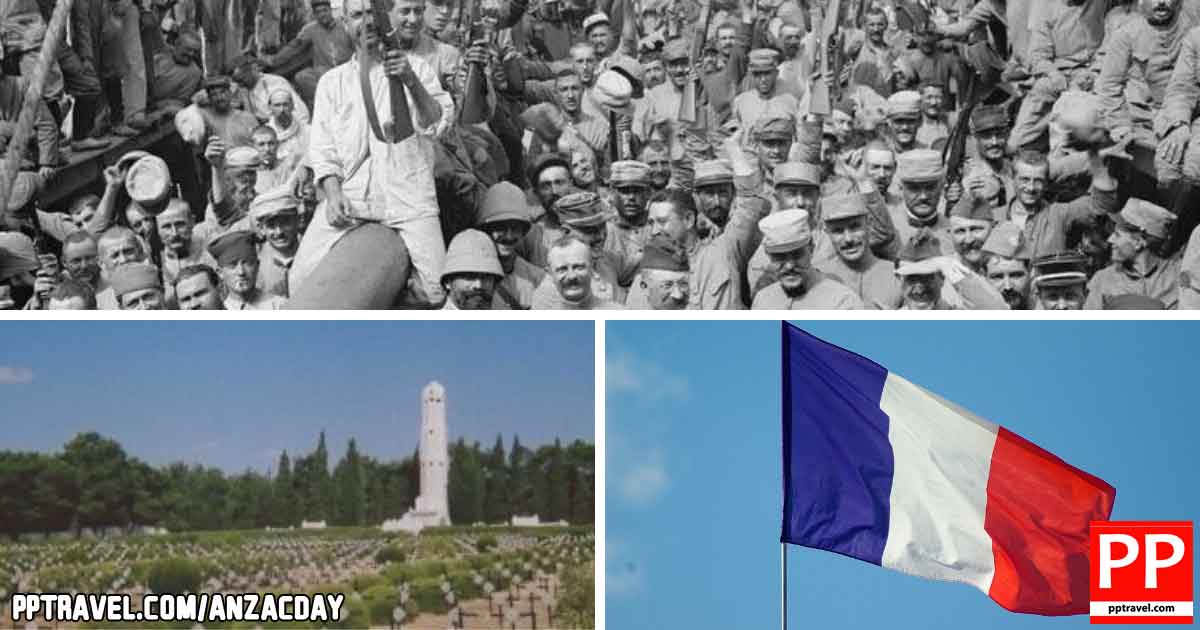 On day 2, the 26th of April, the Ottomans counterattacked the French but suffered heavy losses and eventually began surrendering to the French in swathes resulting in the French being withdrawn from the Asiatic side to join the main conflict at Cape Helles where they took up position near Beach 'S'. By the 28th of April there were now 24 French battalions embarked at Cape Helles but the defensive power of the Ottomans along with poor leadership, gaudy uniforms (making them easy to spot), exhaustion and troop demoralisation led to the failure of their first push north (in the first Battle of Krinthia) towards the rest of the allies who had landed at ANZAC Cove and Suvla Bay. But it was in the Second Battle of Krinthia, where a general advance was ordered by General Sir Ian Hamilton, that the French fought alongside the British, the New Zealanders and the Australians and suffered their heaviest losses in some of the bloodiest fighting at Kereves Dere, a location the French later called Le Ravin de la Mort (the Valley of Death).

From some of the surviving French medical journals comes this recount of the battle:
"We laid poor fellows in rows - groans were piteous to hear - bandages soaked in blood, clothes torn to ribbon - ever more wounded arriving"

But as the days passed so did it become evident to the French, much like to all the allies on the peninsula, that the conflict had become another front to the war and the battle had developed into a deathly stalemate. Or, as French soldier Arnaud Pomiro wrote in a letter home:
"So it's siege warfare, or if one prefers, trench warfare, exactly as the French front. I see no end to it"

The French troops who had wrongly been previously regarded as a bit of a "weak link" received a new commander in the form of "Western Front Star" General Henri Gouraud, and under his direction the French mobilised for their most impressive advance on the Ottoman positions at Krinthia on June 21st 1915 and finally won the high ground from the Turks but sadly on June 30th Gouraud became one of the highest-ranking officers of the entire war to be wounded when in an artillery explosion he lost his right arm and had both legs broken. He was replaced by a General of "lesser calibre" and the French involvement at Gallipoli diminished as a result and so it was that in September that French troops had started to be re-deployed to the Macedonian front in the fight against the Bulgarians. French soldiers did remain with the British, however, right up until the final disembarkation of Cape Helles on January 8 and 9 of 1916.

The 42,000 metropolitan and colonial French soldiers that served at Gallipoli are now honoured at a cemetery and memorial above 'S' Beach where in four ossuary's there can be found over 3,000 skeletons as well as near on 2000 graves contained in the cemetery. Almost one third of all French troops deployed to Gallipoli now rest there in peace.

Viva la France. De peur que nous les oublions. Lest We Forget!
Mark is one of the managing partners of PP Travel and has travelled to Turkey dozens of times and to the Gallipoli ANZAC Day Dawn Service on 16 occasions

Posted: 12 January 2020 12:28:18 GMT by Mark
Being at Gallipoli for the dawn service on Anzac Day where our forefathers landed in Turkey, creating the Anzac legend, will be a moment cherished by a privileged few. PP Travel is a an Australian and NZ DVA recognised Anzac tour operator who will ... read more

ANZACS at Gallipoli - A Hero and his Watch
Every soldier involved in the Gallipoli Campaign was a gallant hero and here we regale the story of Major George 'Eric' Hamilton Beamish OBE VD, of the 9th Company, Wellington Moun..more

A Brief History of Istanbul (Not Constantinople)
An amazing city in spectacular surrounds. As the capital of the Eastern Roman Empire the city rivalled the might of Rome in antiquity and remains a destination of envy for many. Is..more